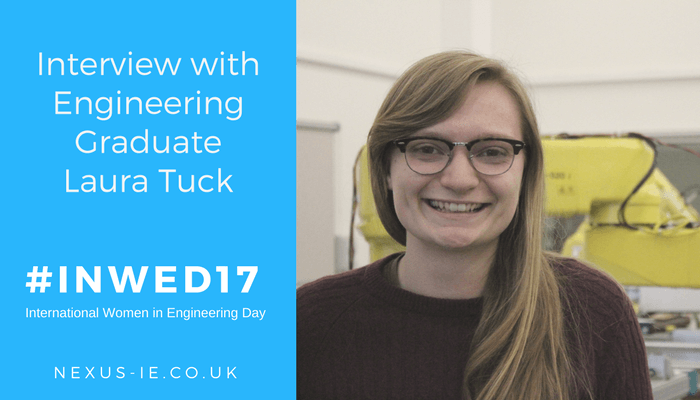 With Nexus IE MD Julie Dean being an advocate for Women in Engineering, Nexus IE are eager to celebrate International Women in Engineering Day #INWED17 on June 23rd. We couldn’t think of a better way to support the message of encouraging young people and women into a male dominated industry than by introducing you to some inspiring females who are doing just that.

First up we meet Laura Tuck, an engineering graduate originally from Fairfield in the West Midlands. She is currently studying for her masters and working alongside our sister company Innomech on a 6 week project (which you can read more about here).

Thanks for taking part in our interview series Laura. Tell us a bit more about yourself.
I have always loved anything outdoorsy: I have spent a lot of my summers working as a water sports instructor at summer camps and during my time at University I was secretary of the scuba diving society. I’ve also always loved making things, hence my interest in engineering.

What a coincidence, Nexus IE MD Julie Dean also loves scuba diving! So you’re currently studying?
Yes I’m in my final year of a manufacturing engineering masters at the University of Cambridge and planning on going on to a graduate role as a design engineer at Dyson.

That sounds exciting. So what does an average day look like for you at the moment?
My course is hugely varied so it’s really hard to think of an average day! At one extreme there are days full of theoretical lectures covering anything from material science to brand management. At the other extreme are team based industrial projects with days consisting of on-site work such as process observation, data analysis or interviews from 9-5 and then evenings of analysis and report writing.

That sounds intense. Can you tell us any more about your achievements in the field of engineering during your studies?
Within the last year I have had numerous projects through University. These have included work with Jaguar Land Rover, Prince’s and Melton Foods. I also completed a University based design project for which I got on the front page of the Cambridge News! Most recently I have been partnered with Innomech to work on an inspection and automation project for my final piece of Master’s coursework.

Fantastic and well done on achieving front page news. So what inspires and motivates you Laura?
I was encouraged into engineering by various teachers who really were an inspiration. I had teachers who had worked for firms such as Motorola in designing their mobile phones and I always thought it must be so cool to see products that you had contributed to out in the world. Now I’m at University I think I am motivated by my natural drive to just do the best I can do.

And what do you like most about engineering?
I have always been extremely inquisitive and love being able to learn about how things work and how they are made. What’s even better than that though is the opportunity to influence those things. That’s one of the reasons I’m so excited to be able to work at Dyson: to contribute to products that so many people use every day will be really exciting.

Do you think that engineering is recognised as male dominated field?
I definitely think it is. I often get a surprised response when I tell people that I study engineering. However, I also think this is changing. A lot more women seem to be interested in studying engineering and around 25% of people on my course are women (which is much better than engineering as a whole!)

What does International Women in Engineering Day mean to you?
I think it’s really great to discuss the issues which do arise and some of the barriers that might put women off engineering, as well as advertising engineering as a whole. I know the main barrier to me studying engineering was that I didn’t really understand what engineers did so it was something that simply didn’t occur to me until it was introduced by a teacher.

Do you think it is important to encourage woman into engineering roles?
I think engineering is hugely important, especially with the upcoming skills gap and the current drive to expand British manufacturing in the wake of Brexit. It just makes sense to ensure a path to engineering is open to as many people as possible to help approach these issues.

What do you think can schools do to engage girls and young people with STEM subjects?
As I alluded to earlier, I think education about what engineering really is is vital in engaging and encouraging as many people as possible. The subjects which lay the foundation for engineering at school (maths and physics) rarely discuss their application in fields such as engineering so I think that is a real missed opportunity.

Do you have any advice for those looking to follow a career in engineering?
Generally, be prepared to work hard and think outside the box, but definitely consider a career in the engineering industry.

Laura, thank you so much for taking part in our mini interview series for International Women in Engineering Day #INWED17. It is great to showcase the real people behind the roles! Good luck with your future endeavours

Welcome to the Nexus IE Blog

With a commitment to making your technical innovation a commercial reality, Nexus IE aims to bring you relevant and informative content surrounding your product development and manufacturing processes.